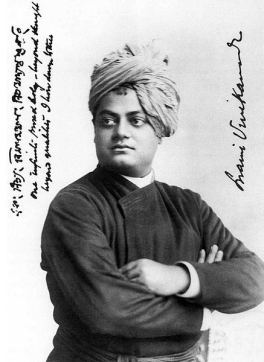 Today is Swami Vivekananda’s birth anniversary and I am recollecting the day I visited The Art Institute of Chicago during the winter of 2005. This was the venue where Swami Vivekananda delivered his famous speech “My sisters and brothers of America” on Sept 11th 1893 at the World’s Parliament of Religions.

While at The Art Institute of Chicago, I went to the information counter and enquired if there was any literature or reference to Swami Vivekananda’s speech. The woman at the counter seemed knowledgeable of the event and looking through some folders in her cabinet, pulled out a flyer and said “this is all I have here with me”. The flyer contained brief description of the event and gave a short bio of Swami Vivekananda. In my zeal to learn more, I asked if I could go see the place from where the speech was delivered. I don’t know what influenced that kind lady but what happened next was beyond my expectations.

“That hall is generally locked and is not open for visitors” she mentioned and after a long pause looking into my eyes she said, “but you look to be uniquely interested… let me see what I can do for you”. Saying that she disappeared and after a while came back with a bunch of keys in her hand. “Follow me” she said and took me down the hallway to a large door. The door opened to a huge auditorium and there she walked me to the stage of the auditorium. “Approximately this was where the Swami was standing when he delivered the speech” she mentioned standing at a spot. What happened later was even more unexpected. “I have to go back to my desk… I have lot of work” she said “but you can stay here as long as you wish”. Later in a very metaphysical style she mentioned “people, events and words carry vibrations and I am sure the vibrations of the speech are still here… see if you can feel them and soak in the energy of the Swami” saying that she left. I stood at the place where Swami Vivekananda was standing for a long time trying to mimic the event in my minds eye… I spent about 20-30 mins in the auditorium and walked through every part of the auditorium. Needless to say that was spiritually exhilarating to have come so close to the historic event that I grew up reading in books.

Swami Vivekananda’s works have been a great influence through my formative years and to-date. In my view, Swami Vivekananda was the first to give modern meaning to the ancient Vedanta knowledge and made it not only easily available but also applicable for the present generation. His interpretation of the Bhagavad Gita and Karma Yoga are the master pieces in my view. Below are couple of excerpts from Swami Vivekananda’s lectures I am reflecting upon today –

“The goal of mankind is knowledge. That is the one ideal placed before us by Eastern philosophy. Pleasure is not the goal of man, but knowledge. Pleasure and happiness come to an end. It is a mistake to suppose that pleasure is the goal. The cause of all the miseries we have in the world is that men foolishly think pleasure to be the ideal to strive for. After a time man finds that it is not happiness, but knowledge, towards which he is going, and that both pleasure and pain are great teachers, and that he learns as much from evil as from good“

“In the primal state, which is called chaos, there is perfect balance. How do all the formative forces of the universe come then? By struggling, competition, conflict. Suppose that all the particles of matter were held in equilibrium, would there be then any process of creation? We know from science that it is impossible. Disturb a sheet of water, and there you find every particle of the water trying to become calm again, one rushing against the other; and in the same way all the phenomena which we call the universe — all things therein — are struggling to get back to the state of perfect balance. Again a disturbance comes, and again we have combination and creation. Inequality is the very basis of creation. At the same time the forces struggling to obtain equality are as much a necessity of creation as those which destroy it”

2 thoughts on “My day with Swami Vivekananda”