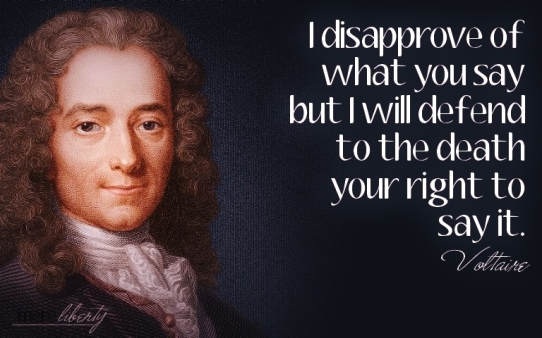 Does it happen to you that involuntarily you stumble upon some random topic and encounter it everywhere and without you actively looking for it, you are somehow learning about it? Over the weekend, while I was waiting to get my car washed and turned on my radio, I listened to a debate on Freedom of Speech. Went to the library on Sunday and randomly picked Thomas Paine’s classic book Age of Reason and on the first page, he talks about Rights of Speech. I was surfing YouTube for speeches by Christopher Hitchens and one of the top listings was his talk on Freedom of Speech. Last night I added Steven Pinker on my Twitter account and I see that he has published an article on Freedom of Speech just last week and today morning I woke up reading about the AIB Roast controversy. With these many coincidences, I thought of giving a bit more attention to this topic and try connect the dots.

We all know that Freedom of Speech is one of the fundamental building blocks of a vibrant Democracy. Freedom of Speech has a long history and the scientific progress we have made and the new intellectual frontiers we have conquered can be attributed to this basic human right. Our ability to freely share ideas, fearlessly question established practices and act on unpopular opinions is how we have advanced as a human race.

I was curious to understand ‘exactly’ how this right is conferred in the context of the world’s oldest and the largest democracies i.e. United States Constitution and The Constitution of India. The language is short but loaded with boundaries and exceptions. Here they are –

“Congress shall make no law respecting an establishment of religion, or prohibiting the free exercise thereof; or abridging the freedom of speech, or of the press; or the right of the people peaceably to assemble, and to petition the Government for a redress of grievances.”

Article 19 – The Constitution Of India

Nothing [above] shall affect the operation of any existing law, or prevent the State from making any law, in so far as such law imposes reasonable restrictions on the exercise of the right conferred in the interests of the sovereignty and integrity of India, the security of the State, friendly relations with foreign States, public order, decency or morality, or in relation to contempt of court, defamation or incitement to an offence.”

Without going into the legal interpretation and complexities of the language above, what is the best way to objectively test how these rights are implemented and upheld i.e. what’s the proof of the pudding? Surfing through the net, I learnt that there is a ‘World Press Freedom Index’ that measures the freedom of flow of information in 180 countries. In 2014, Finland tops the index closely followed by Netherlands and Norway. At the other end of the index are Turkmenistan, North Korea and Eritrea, three countries where freedom of information is non-existent. USA is ranked 46 and India 140 within the list of 180 countries.

Freedom of Speech does not mean just a right to talk or be heard, but also by the same token, hear others.

Thomas Paine in his timeless classic ‘Age of Reason’ writes –

“You will do me the justice to remember, that I have always strenuously supported the right of every Man to his own opinion, however different that opinion might be to mine. He who denies to another this right, makes a slave of himself to his present opinion, because he precludes himself the right of changing it.”

Watch this impressive talk by Christopher Hitchens. One of the most respected, hated, learned and fearless personalities of our times. I loved his stage presence, oratory and vastness of knowledge.

My favorite quote from the talk that connects the dots to what Thomas Paine says.

Steven Pinker’s take on limits of Freedom of Speech. You can read the full article here.

“It’s true that free speech has limits. We carve out exceptions for fraud, libel, extortion, divulging military secrets, and incitement to imminent lawless action. But these exceptions must be strictly delineated and individually justified; they are not an excuse to treat speech as one fungible good among many.”

If you are lazy to read the article, you may like to watch this YouTube video based on the same article.

So how should we think about the AIB Roast controversy in the light of Freedom of Speech relating to performing arts? I’ll let Salman Rushdie answer that question with an insightful Hindu mythological story (starts at ~ 1:25 minutes into the video).

My personal view is that Freedom of Speech implies knowledge of something one believes to be true. Sedition, derogatory insults hurled with an intent to hurt feelings, etc. are not considered knowledge and hence are outside the purview of Freedom of Speech. Speech is very powerful and history is rife with examples of how words were used to move an army, commit unthinkable atrocities and also used to gain freedom and solace a nation. Obviously freedom is a natural right and comes with responsibility. One without the other is rarely effective.

2 thoughts on “Freedom of Speech”