About 15 years ago I attended a presentation on Project Management that changed the trajectory of my career. Recently I shared that story and some more stories with the students of Project Management Course at Seattle University. This post is a summary of my talk. Since it was an hour long talk and I had packed in many stories, I am breaking the talk in two parts. Here is part 1 of my talk –

First let’s make a historical decision to illustrate how professionals are selected to lead major projects. Let’s assume you are US Military General Leslie Groves making a decision to hire a Physicist to lead Manhattan Project during World War II. Who would you pick?

The historically correct answer is A. Slim aka. J. Robert Oppenheimer.

One person cannot build an atomic bomb and it takes many physicists to work on the project. As a leader, you would want someone who has the charisma, vision and ability to attract right talent to work on the project. Given the intellectual nature of work, physicists should feel empowered to work for the leader. Micro-management and leading by fear will not work for such a project. Oppenheimer fit the requirements and he got the job.

Sarge aka. Edward Teller had a more aggressive / fearsome personality and reputation. Though he had the strongest motive of the three to build the atomic bomb, he just didn’t have the right temperament to lead the project. He was the second choice of General Leslie Groves.

Doc aka. Enrico Fermi was the most brilliant Physicist of the three. He was the last preference. It’s not just technical brilliance but ability to lead people that matters the most.

Now this brings us to the presentation I attended 15 years ago that changed the trajectory of my career. The presenter asked the audience –

“What are the minimum traits required for a professional to thrive and succeed in the knowledge economy?”

Even after 15 years, I vividly remember the slide I saw which I have reproduced here below.

As we made the historic decision above, consciously or unconsciously we were looking for the following three minimum traits in professionals for high positions –

Here are some more stories for each of the three traits to illustrate what they really mean.

Leadership – I am Spartacus

Spartacus was a slave that lead a grass root uprising against the mighty Roman Empire. They fought with the Roman Empire for their freedom… the freedom to go home and live with their families. The group of slaves lead by Spartacus scored some early wins before they were defeated. The Roman officials approach the captured slaves and say – “Slaves you were and slaves you remain. Your lives are spared on one condition that you hand over Spartacus”. See what happens next in the video below.

As you saw in the video, Spartacus was not just a person. Spartacus was a symbol an idea of something that everybody believed in, an idea that brought all the slaves together towards a common purpose. Leadership is about driving such a unity of vision. Such characteristics of leadership can be seen in leaders leading freedom movements, military missions, space missions etc. The same characteristics help projects succeed.

In the knowledge economy majority of what we do on a daily basis is solve problems i.e. deal with process problems, customer problems, sales problems, people problems, audit problems, etc. Yes, one should have some core skillsets / qualification / certification to get the job. However one cannot solve problems using one field of study. Problem solving requires multi-disciplinary thinking. Take a look at the slide below. Can the Doctor examine the patient and diagnose the ailment with just expertise in Medical Sciences or would also need knowledge of other fields such as … 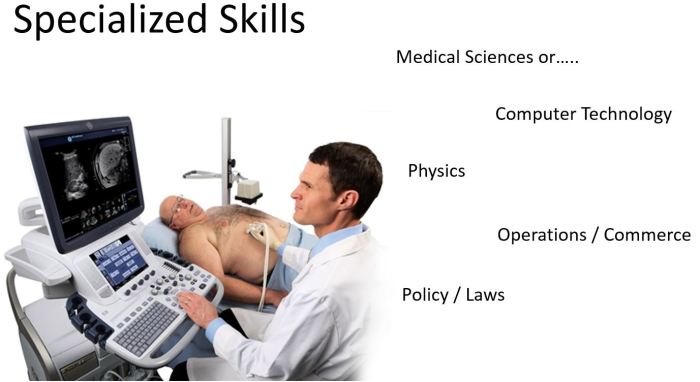 Developing multi-disciplinary thinking is similar to having multiple tools in your tool kit to deal with variety of problems. As Abraham Maslow says – “If the only tool you have is a hammer, you tend to see every problem as a nail” .

This need to develop multi-disciplinary thinking got me hooked to continuous learning.

Let’s make another decision and pick a Program Director for NASA’s Apollo Manned Lunar Landing Program. i.e. someone that can get a man on the moon and bring him back successfully. Who would you pick? 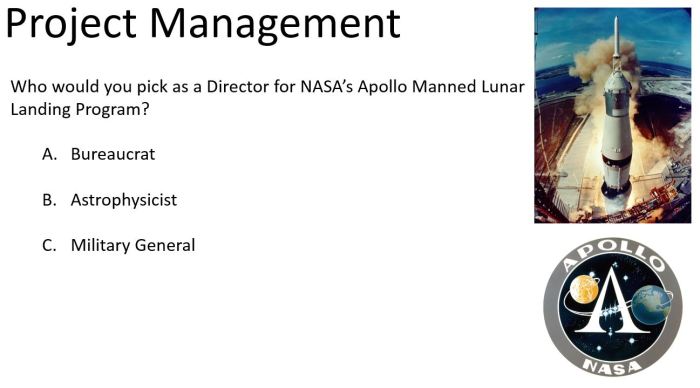 Here is the team.

It was a Military General that lead the program to successful completion and a Bureaucrat (Treasury Department) that got all the early political support and the funding to execute on the project. General Samuel C Phillips had lead the ICBM (Inter Continental Ballistic Missiles) Technology development for US military and he used that experience in leading NASA’s Apollo Program. This case and Manhattan Project discussed above clearly demonstrates that proven ability to ‘get things done’ claims more premium than technical skills.

Getting things done is not easy. We see failures around us all the time. Project management as a study provides different lenses to deal with projects. The most important thing it teaches is ‘What not to do’. By definition an expert is someone who has failed a lot of times within a very short span of time and knows what works and what doesn’t. Similarly studying Project Management is learning from the mistakes of others.

Is Project Management an Art that is unique to the capabilities of few individuals or a Science that can be systematically studied and applied predictably? Will write about that in my next blog post.s